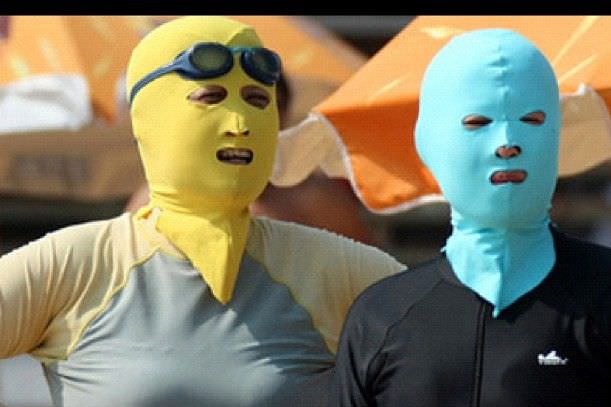 When you think of a beach vacation, you probably envision long stretches of white sand, bright sun beating down on your skin and a lot of barely-there bikinis. If your beach vacation involves a Chinese beach, though, you’ll likely encounter a much weirder scenario.

One major feature of Chinese beaches that you’ll notice as soon as you set foot on the sand is a vast sea of large umbrellas with locals huddled underneath to block out the sun’s rays. On particularly busy days, identical umbrellas might cover almost the whole beach, and they may be lined up in neat rows if a local vendor has managed to establish a business renting out both the umbrellas and specific beach slots. While Chinese beach-goers who plan to hit the water might be wearing swimsuits, they’ll likely be in skin-covering everyday clothes when under their umbrellas.

All of this sun over-protection has a purpose, though. In Chinese culture, only peasants who work in the fields tend to have skin darkened by the sun, so pale skin is prized as a sign of wealth. At some beaches, locals go to great lengths to avoid getting a tan. Facekinis, lightweight face masks that cover the head, leaving only small holes for the eyes, nose and mouth, have become a popular item sold at beachfront shops, and sun-protection gloves keep hands and arms safe from UV light.

In some cases, weird beach attire isn’t donned in fear of the sun, but in fear of what’s in the water. Algae blooms and pollution are common in Chinese waters. The country has some of the most polluted beaches in the world, with 68,000 square kilometers of seashore affected in 2013. Pollution stems from industrial discharge and waste from human population centers, but the bad water quality doesn’t stop the locals from enjoying the beach. Some people simply swim through the thick algal mats, ignoring them completely, while others slip into full-body wetsuits to keep their skin from touching any of the contaminants. If you’re looking for a pollution-free beach experience in China, offshore islands and more remote areas may be better options compared to highly populated urban areas with industrial facilities dotting the coast.

When the sun starts to set, a Western beach-goer might build a bonfire on the beach or simply head home for the day, but in China, a seashore sunset means something different. If you stick around on a Chinese beach until dusk, you’re likely to see swarms of local Chinese roll up their pants legs and wade into the surf with nets and buckets in search of seaweed. While some of these collectors bring their sea-veggie treasures home to toss in the family wok, most of them sell their finds to local restaurants. If you see fresh seaweed on the menu when you head to a beachfront restaurant for dinner, it’s likely that your meal was freshly plucked from the sea moments ago.